I set out with an aggressive plan for June: the local Roan Groan road race and time trial, GP Sagueney and Tour de Beauce in Canada, pro road and time trial nationals at home in Knoxville, and U23 nationals in Louisville. Here’s what happened!

Roan Groan: I missed the break! Then went up the mountain pretty fast to lock in fifth place. Not the worst, as Dirk Pohlmann always tells me “You get the opportunity to win at Roan every other year.” Guess I’ll just have to come back next year.

I took the TT seriously and was super pleased to come away with the win. This is a TT I’ve raced several times and I felt like I nailed the pacing, looking at the Strava segments my average power for the false flat to the finish was within a few watts of my total average… Not sure if that makes sense, but it means I managed to hold the effort on the steady drag after the climb, which is good! I really like the new TT bike.

GP Sagueney: Day one was a total disaster, I imploded after making the winning break and ended up way down with the rest of the boys. With the general classification out of the picture, this left us no choice but to become stage win hunters, but that’s where it got cool!!

After a nasty crash that sent our teammate Masbou to the hospital (he’s ok), Emile and I slithered our way to the front for a tricky finale and decided to pop off the ol’ Shake-and-Bake, in a beautiful union of American and Canadian flexing.

Our synchronization is pretty close, but we’ll keep working on it

Finally, I survive a podium without being the navel cadet

Stage 3 was a crit inside what seemed to be one continuous pothole, and Alec rolled the break for fourth. Maybe a better way to describe the course is that several times people hit bumps so hard their feet were blowing out of the pedals.

Stage 4 I was on a day! Pretty much going for the break constantly, then it stuck with me and P.A. tucked in. With the GC leaders (Canyon) motivated to let it stick to soak up the time bonuses, it made for a great opportunity to go all the way. The last few laps we were gradually shredding guys, and then it went full nuclear last lap before getting tactical on the crosswind and descent to the finish. I played the sprint wrong and ended up second. Which was cool, but a bit of a heartbreaker. 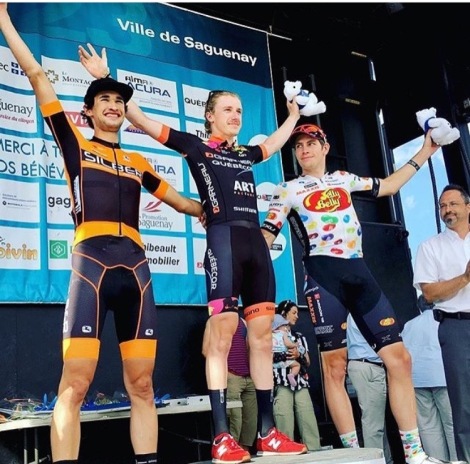 at least Ben still looks at me with love

Beauce: two days later, we were back at it again. This is where Silber started ripping it and I started to get sick. Emile and Alec made the the 27 man break that got like 25 minutes on the field, then Emile decided he had so much fun winning the week before that he might as well do it again and grab the yellow jersey.

TT day: Alec smashed everyone, winning the stage and taking the yellow jersey. Looks like time to put the deep wheels on and ride the front…

With a lot of hard pedaling, we held the jersey through the next two stages of aggressive racing. Thankfully we were able to get some help from the French team. There is something inspiring and also spirit-breaking about going full gas and realizing some French guy is going pull-for-pull on his training wheels…

Stage 5 was probably the hardest circuit I’ve seen in North America, long story short: we lost the GC pretty hard. Not much more we could do.

My joke through the trip was that Quebec is “the Europe of Canada” and I stand by that. Everybody is speaking French, the roads are crazy, and the crosswinds were the craziest I’ve ever seen. I was literally almost thrown off my bike one day. Not an exaggeration. Basically the whole trip was the closest thing you can get to racing in Europe without crossing water. Did I mention the races are really, REALLY hard?

After a nightmare travel day(s), I had a few days at home to prep for pro nationals.

I had a reasonable TT, but of course the cool part was getting to race the national championships in front of everyone I’ve ever met. Hearing a couple hundred people chant your name up a climb a mile from home is pretty crazy, I would definitely recommend it.

Manual For Speed made me a GIF! 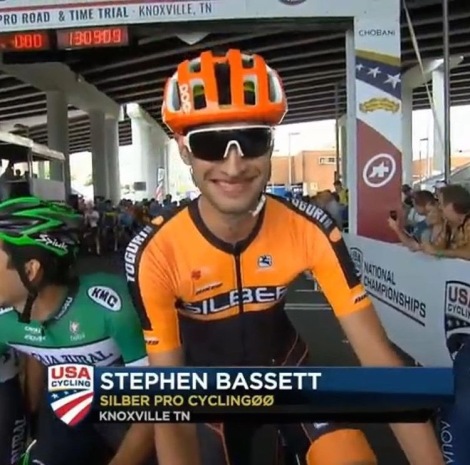 I wasn’t feeling too hot, but managed to claw my way back on the last 4 laps or so and make the main group (third group) and pull of a reasonable 16th. I wasn’t about to sit up after all the cheers I got going up Sherrod! It was really pretty cool to show Knoxville what a big bike race looks like. I’m glad it will be coming back next year!

U23 Nats: I rode a really steady TT for tenth, it’s crazy how deep the competition has gotten the last few years.

In the road race, my mind, body, and spirit finally said enough. I was a shell of what was once a bike rider and pulled out. The truth is you can only push through so many times, and after weeks of faking it, the tank is empty. It’s clearly time for a break, so I’ve decided to sit out the crit and take some time off the bike.

Basically, I think I had a great plan for June, which got derailed halfway through by sickness. I almost had enough time between races to kick it, but then would have to dig the hole deeper to make it through the races, and was always a step behind where I needed to be. The best laid plans go sideways sometimes and that’s where I’m at now. There’s lots to play for the rest of the season and the best way to get ready now is to chill, which sounds perfect to me.

That’s it, thanks for checking in!

One response to “June update”

A lady drove up to us and asked “HOW DO I GET BACK TO CIVILIZATION?”
Biking is fun and not hard at all!!! Getting back into the swing of things and heading toward a busy few months of racing- bingo !!!
Summertime in Tennessee? BINGO 🌴
Finished up the Carter City Omnium with a crit win- unfortunately my companions in the breakaway went down in the final laps. Happy to leave with some fitness and some numbers on the board- 2 more weeks to tüne up before nationals 🇺🇸