Redlands is the season opener for big domestic races. It sets the tone for the rest of the season, so it’s important to show up prepared. HBU23 was ready.

Stage one is a circuit race with a short but steep climb every lap. The guys did a great job riding near the front of the race and especially towards the end of the race they moved me up the group to position me for the sprint. Unfortunately, I miscounted the laps and sprinted a lap early and then was really tired for the real sprint. This was my mistake and I don’t think it is one I will make again soon. Though I was disappointed with the stage result, I knew I had the form to be a factor in the next races.

The Big Bear TT. This is a time trial up at around 7200 feet, so elevation starts to be a factor. The team all had solid rides on a fast, sweeping course. 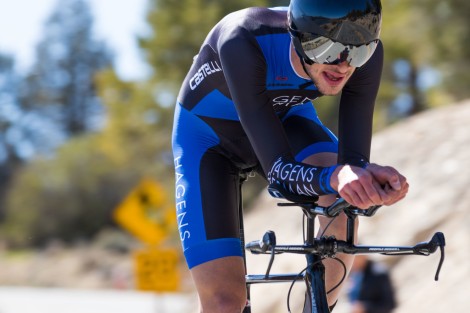 The Oak Glen course was a change from the Beaumont route that has been used the last few years. That was a 120 mile slog that took its toll over the distance. By contrast, this year’s race was only 72 miles, but the speed was ballistic most of the day. In addition, there were a lot of fast descents where tiny rocks flew up from our tires and peppered the peloton. Once again, the boys made sure I stayed near the front, especially before the hard sections. The race was really difficult and then we started the 2000 foot climb up to summit finish. I got dropped from the lead group about halfway up the climb and rode in for 21st place. I felt ok about that result but I was looking for more.

Sadly, we lost some of the team to time cut on this day.

THE CRIT! All of our remaining riders were all-arounders like myself, so we weren’t necessarily looking for a result in the crit. However, on a technical circuit like this one with 8 corners, riding near the front saves a ton of energy because you can ride the corners smoothly instead of having to brake and then sprint out of them. Our director, David Richter, kept reminding us that if you ride at the front you usually finish at the front because so much of the race is based on positioning. We all stayed near the front and then there was a big crash with 5 to go that Noah, David, and I avoided. Diego was able to stop before he got to the crash, but a breathless rider wasn’t paying attention and rode straight into him and caused him to fall. Luckily no one was seriously hurt in the crash.

The race was on anyways and the remaining riders barreled toward the finish line. I snagged tenth while David and Noah both slotted into the top 20. I was pretty excited about the results and we rode back to the house. 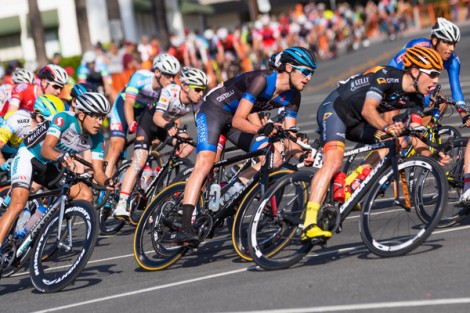 SUNSET IS A REALLY HARD BIKE RACE. It starts with a few laps around a shortened version of the crit course from the night before, then climbs up to the infamous Sunset loops, which must be completed a dozen times. The loop is a hard climb followed by a Then the race descends back into town for 5 laps of the full crit course.

We got off to a fast start and were soon ripping around the Sunset loops. The important things on this course are conservation and positioning. You have to save as much energy as possible and make sure you start the climb near the front because people get popped off the back each lap and you don’t want to have to go into the red to get around them and catch up.

The boys and I were really in the zone and we were so focused that we weren’t sure which lap we were on. I made sure I checked to make sure which was the last lap this time, though! By the last loop I was really struggling but so was everyone else. On the way back to the crit course, I knew it was really important to come into the crit course at near the very front of the race. This was a bit of a poker game because I didn’t know the way into town that well, but I kept an eye on Chris Horner’s position because I knew he would know when to move up.

I came into the crit course second or third wheel, so perfectly positioned. This is where I started to suffer a lot more because I was cramping when I had to readjust my body to set up for the turns. Tre and the boys were right on course though and I could hear them screaming for me so that helped me to push through and keep focused. The racing was super fast and I knew where I had to move up because Richter made sure I knew where to go and I had done it the night before. I made it by a lot of guys before the crucial turn and then passed one more in the closing straight to finish sixth.

All of our riders that started received finish times. I was super proud of how these first year riders rose to the challenge and were solid racers.

After the race I was super excited and exhausted. I made a big commitment to cycling this year by backing off from school, so being able to be racing for the win at a stage of Redlands is a big deal to me. This ride makes me feel like my investment in cycling can be worth it. I am excited to keep the momentum going into Joe Martin Stage Race next week. 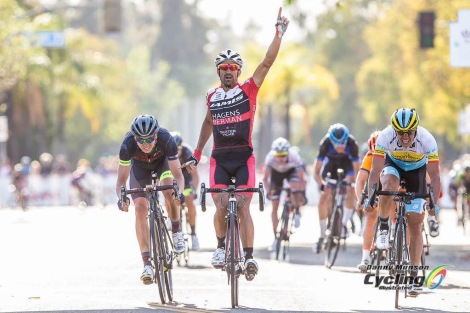 A huge thank you to all of our staff at the race: Tre (mechanic), Richter (director), and Jim and Chris (soigneurs). They all did great work for us and made sure everything ran as smoothly as possible.

Also, a big thank you to the Nichols family for welcoming us into your home and making sure we were well fed and ready to race.

Dinner. I eat at least 1.5 times as much as anyone else, I think.

Jim and David check out the new team car

A quick product note: we received the new Oakley Jawbreaker glasses for this race. They are straight up great. They have a distinctive look and increased field of vision. So we don’t notice them but a lot of other people do. 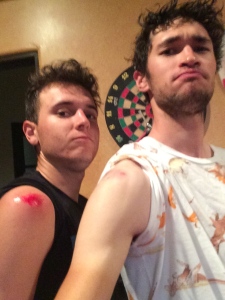 I crashed really hard on my shoulder last year and kept the sleeve rolled up for a month of so. Now I do it out of habit. Diego’s crash now allows him to be a proud member of the right sleeve up club.